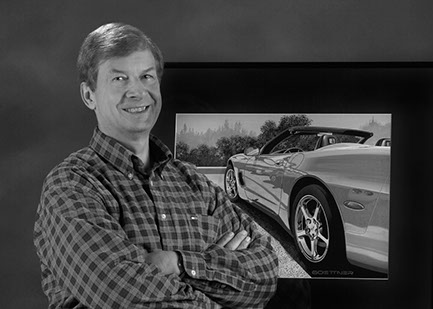 Michael Goettner, originally from Germany, lives in Sylvania, Ohio. He received a degree in art & design at Ferris St University. Upon graduation, he was inducted into the military & served with the U.S. Army First Air Cavalry Division in Vietnam. He was in the artillery, and occasionally took on the role of combat artist.

Michael pursued two career paths (Industrial Design, and Fine Art). The fine art element began at a very young age. Goettner ultimately became the manager of the Creative Design department at Owens-Illinois, Inc., the world’s leading packaging, and container company. He is a former member of the Industrial Designer’s Society of America, and has been awarded numerous design patents.

The technical design discipline influenced Goettner’s realistic style of fine art. Modes of transportation, as well as an interest in automobiles reflect the art genre. His Corvette aftermarket wing & ground effects concepts were shown in Motor Trend Magazine, and the automobile fine art was featured in Automobile Quarterly, and Auto Aficionado publications.

Goettner’s art has been exhibited, or hangs in locations around the world including the Pole Position Gallery in Paris, the renowned Auburn, Cord, Duesenberg Museum, the Automobile Hall of Fame Museum, and many others. His work has been featured, or exhibited at most major automobile events including the Hilton Head, Houston Keels & Wheels, Cincinnati, and Meadowbrook Concours, as well as the Concours of America to name a few. His art has received awards at most venues, and has been signed by a number of personalities including Carroll Shelby, Nascar’s Wood Brothers, and Indy car & Nascar stars Danica Patrick, and Bobby Rahal.

Michael is also a military artist and was a member of the Air Force Art Program. Two of his aviation paintings were placed in the Air Force Art Collection at the Pentagon. A commemorative plaque, from the Governor of Kentucky, and the Adjutant General was given in honor of a painting depicting a Kentucky National Guard war deployment.

“It has been an honor to have exhibited art with many of the premier automobile, and aviation artists in the world”. I look forward to each new painting showcasing the art that exists in man’s creations.